The vast majority of chain and flight collectors in operation throughout the world do not have any form of monitoring system installed to protect against operational failure. Traditional safety devices consist of a shear pin sprocket device, with a limit switch, designed to protect the drive system if a load or torque exceeds the working load of the drive chain; in the event that this occurs, the shear pin will break, the limit switch will be activated, and the drive motor is shut down. This process will typically protect the drive chain and drive motor from failure. When the shear pin breaks, the clarifier is drained, the cause of the overload is established and corrected, a new shear pin is installed, and the collector is placed back in operation.

Alternate mechanical or electrical torque monitoring systems can be supplied at additional cost that, in the event of an overload, can be reset after correcting the cause of the overload. These systems do not require the manual replacement of the shear pin or draining of the basin but are typically not cost effective.

Traditional Monitoring Systems
In an attempt to eliminate collector systems crashes, a number of different systems have been tried to monitor flight motion and shut down the collector system if the collector flight is misaligned or no flight is seen after a certain time limit. More recently, one system has been introduced to shut down the collector system if the “notched” collector chain tries to jump a sprocket tooth. These systems have usually been disconnected due to nuisance failures caused by sensor failure or limited sensor range, flight target failure or corrosion, field installation or monitoring location errors, and excessive tooth jumping of “notched” collector chain.

Where flight monitoring is used to shut down the collector system, if a flight is not seen within a set time period, considerable time can elapse and considerable failure can occur before this situation is monitored, taking into consideration wide flight spacing and slow collector speed. In addition, if flights are not evenly spaced, nuisance shut downs can occur.

SmartGuard Sprocket Motion and Flight Misalignment Monitoring Systems
Brentwood’s Polychem brand developed the SmartGuard system to improve upon traditional monitoring systems and reduce potential system crashes. SmartGuard is a cost-effective approach to safety that can be installed both in new installations or as a retrofit to existing installations. It includes two separate and distinct monitoring zones for full system protection: Sprocket Motion Monitoring (SMM) and Flight Misalignment Monitoring (FMM).

The SmartGuard SMM system checks regular motion of both lower, rear idler sprockets where the collector chain is in tension. Under normal operation, sprocket motion will be uniform, providing defined, repeatable monitoring locations that eliminate nuisance failures caused by measuring motion along the upper return rail or other non-fixed monitoring locations.

As each lower rear idler rotates (caused by chain movement), the sensor detects the motion of the magnets embedded in the sprocket as they pass the sensor, sending a signal to the control panel where the data is monitored by a programmable logic controller (PLC). If the timing between each magnet passing the sensor, on either side of the collector, is within preset time limits, the sprocket will be deemed in motion and the system will continue to run. If the time differential is beyond the preset time limit, the sprocket will be deemed not in motion, the collector system will shut down, and the control panel will show that no motion has occurred.

The PLC is programmed to indicate that no sprocket motion has occurred equivalent to 2.36 inches (60mm) of chain travel. This sensitivity will allow the collector system to shut down prior to chain, attachment link, or flight breakage. 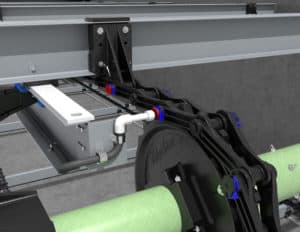 Designed to monitor pin and flight alignment, ChainCheck is an improved component of our SmartGuard system. ChainCheck effectively detects flight misalignment without mechanical sensors. Its home point pin position counts chain revolutions for predictive maintenance and issues an alert when the chain needs to be adjusted.

The system includes mounted sensors located near the head shaft that monitor pins with magnets at the flight attachment link. As the flights pass the sensors, signals are sent to the control panel and the SmartGuard ChainCheck software determines whether the chain has skipped any sprocket teeth on one side or if the flights are in alignment.