Read on to learn how, utilizing its pilot reactor, Brentwood helped a mid-sized suburban community assess potential treatment of ammonia in the city’s potable water source.

What is Ammonia?
Ammonia is a naturally occurring compound found in some chemical products, fertilizers, and as a byproduct of the degradation of organic materials such as manure and urine. Its high solubility means that it cannot be easily settled out of a freshwater source. Ammonia is not typically found in freshwater drinking sources, but a variety of events, including burning fossil fuels, fertilizing crops, ranching, and the leaching of sewage and septic tanks, may potentially produce ammonia. Additionally, areas with soils rich in humic substances or iron may contain higher natural contents.

Drinking water sources close to agricultural or animal confinement areas are especially prone to ammonia contamination, as the soluble ammonia from fertilizers or animal waste will seep into the groundwater via infiltration. Some surface water—lakes, rivers, and streams—can contain up to 12 mg/L of ammonia due to various runoff sources, according to the World Health Organization.

Ammonia itself has a relatively large threshold level before it poses a significant threat. Consequently, the Environmental Protection Agency does not currently regulate ammonia concentrations for drinking water; however, many European nations have instituted a drinking water standard of 0.5 mg/L or lower.

Effects of Ammonia on Disinfection
In municipal water distribution systems, large concentrations of ammonia result in higher dosages of chlorine disinfectant in order to maintain necessary free chlorine residuals. This leads to bad-tasting water and costly disinfection, as well as potential problems fully disinfecting drinking water. According to the World Health Organization, drinking water containing above 0.2 mg/L ammonia may use as much as 68% chlorine, rendering it unusable for disinfection.

Need
As the city grew, new strains were put on its existing water infrastructure. The city currently operates three water treatment plants. A major food processor within the city’s service area creates high demand periods for brief intervals throughout the year, which increased the need for additional storage capacity. These required upgrades to create an ideal situation to optimize the disinfection practices used by the city. The city plans to use chlorine, both free and chloramines, for the foreseeable future. Unfortunately, the current water source contains 2.7 mg/L of ammonia on average, which leads to high required chlorine dosage and disinfection costs. 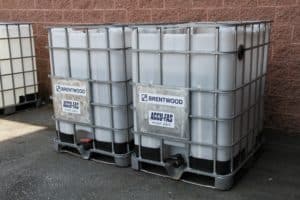 assess the nitrification capability of a submerged attached growth treatment system. Working together with the consultant engineering firm and the city, Brentwood ran a pilot for twelve weeks. A skid-mounted pilot unit  consisting of Brentwood’s patented biological treatment media was erected. Aeration was provided by a blower and diffused aeration system. A composite sampler collected influent and effluent data to the pilot unit.

The pilot demonstrated considerable nitrification efficacy. At flows of 1.5 and 2.5 gpm, 85-90% of the ammonia was removed. This translates to a loading rate of 780 and 468 SF/gpm respectively. This aligned with the city’s goal of nitrifying ammonia to a point that would prevent formation of DBP’s, but not impair disinfection.

It is apparent that a fixed-film bioreactor is a good fit for nitrification of potable water sources. However, many factors influence whether it should be implemented in different municipalities. By utilizing Brentwood’s pilot reactor and design resources, a low-cost analysis can be performed for your municipality or client to achieve project goals.