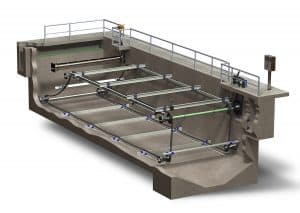 Both rectangular and circular configurations have been commonly used in clarifier basins. The relative merits of the two have been discussed at length for decades. Historically, the selection of rectangular versus circular clarifiers has been based on past experience and the preference of the design engineer or design company. Initial wastewater treatment plant designs in the United States were reasonably balanced between rectangular and circular when collector or scraper systems were designed from steel. With the introduction of biological treatment, corrosion became more of a concern and circular clarifiers became more popular. Non‐metallic chain and flight sludge collection systems for rectangular clarifiers (like our Polychem system) were introduced more than 20 years ago and have overcome the corrosion problem, leading to a resurgence of rectangular clarifiers, particularly for large wastewater treatment plants. Let’s compare the benefits of each configuration.

The shape of the rectangular clarifiers provides a longer path for the wastewater flow and the suspended solids to travel, and subsequently longer detention time which warrants less short circuiting and more sludge settling compared to the center‐feed/peripheral overflow circular clarifiers. In addition, flow distribution among several clarifiers is usually more even and often requires less head loss for rectangular clarifiers.

Rectangular clarifiers typically require less land than circular clarifiers for a similar surface area (21% less in theory). The reduction becomes even more significant in a multiple-unit design, where common concrete walls are used between rectangular basins. The resulting land availability is a major advantage for treatment plant layout. Construction cost is also reduced as a result of the common concrete walls.

The even flow distribution configuration for rectangular clarifiers requires simpler and less expensive pipe work layout and pumping requirement as compared to circular clarifiers where the pipes require a more complicated layout pattern and perhaps a separate pumping station, as well.

Many clarifiers now need to be covered for odor or volatile organic compound (VOC) control. Covers for rectangular clarifiers (using chain and flight systems) are much easier to design and install as well as being less expensive.

Non‐metallic chain and flight systems having multiple flights (scrapers) installed at fixed spacing (typically 10 ft or 3 m) can accomplish both sludge and scum removal. The flights (scrapers) scrape the bottom of the tank and present consistent sludge flows to the hoppers. When the flights travel to the surface of the rectangular tank along the collector chain, the scum/foam is pulled by the flights to the scum trough. Removal of scum and floating solids is almost always easier with rectangular clarifiers, which are known to provide more effective scum/foam trapping via rotating scum troughs. In contrast, the circular scraper systems have only two rotating collector arms with multiple scrapers on each arm that plow the settled sludge to a hopper at the center of the tank. A single cantilevered skimmer arm rotates at the surface to collect scum and concentrate it in a hinged skimmer, from where it is then dragged up a scum beach and trough.

Non‐metallic chain and flight systems for rectangular clarifiers remove all sludge across the collector at constant speed of approximately 2 ft (600 mm)/min. Circular collectors move sludge at much faster rate at the perimeter of the collector than at the center of the collector. It is generally accepted that scraper speeds greater than 6 ft (1800 mm)/min can cause re‐suspension of settled solids.

Where large collectors are to be built, scum control and the effectiveness of wind‐blown mechanism might be difficult with circular clarifiers especially when there is no wind or in covered tanks. Historically, the most negative aspect of rectangular clarifiers is the relatively frequent need to replace collector chains. Before the 1970s, the replacement frequency was every 10-20 years. After the implementation of non‐metallic chains, the frequency reduced to once every 15‐20 years. This timeline is in agreement with the commonality of the rectangular clarifiers.

Non‐metallic chain and flight systems are non‐corrosive, require no routine lubrication, and have lightweight components for ease of installation and maintenance. The use of expensive cranes is not required for routine maintenance. Low-powered motors (0.5 kW) are used requiring minimum power consumption. Sludge and scum are presented for removal in a consistent flow allowing for efficient pump sizing. These advantages in performance, construction, and cost have garnered increased preference toward rectangular clarifiers, which have been widely applied to both the North American and international markets.

For more information on the benefits of each clarifier configuration, contact us today!

3 responses to “Rectangular vs. Circular Clarifiers: Which is better?”