In evaporative cooling applications, the word drift is used to describe the small water droplets that escape the cooling tower within

the air stream. Drift is not to be confused with plume, which is the cloud- or mist-like result of the evaporation process, commonly seen being emitted from cooling towers. While plume is condensing water vapor from evaporation, drift are actual droplets, and these droplets contain the chemicals and solids that are present within the circulating water.

To give you an idea of how small drift droplets are, they typically range in size from 10 to 2,000 microns. The average human eye can only see particles down to 50 microns, so we’re not even capable of seeing some of these droplets.

Why should we eliminate drift?

There are several reasons why eliminating drift is important:

Cooling tower drift and drift emissions are best controlled by using drift eliminators, an essential component in every cooling tower.

How do drift eliminators work? 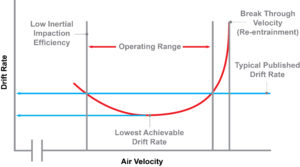 In the 1970s, drift eliminators were used to achieve drift loss rates at 0.01% tower water flow. Today’s drift technologies have advanced to match tighter government regulations. The most current standard for drift loss rate is 0.0005%. This standard is 1/20th of the drift loss percentage from that of the 1970s and is a testament to how far drift eliminating technology has come.

What are the different types of drift eliminators?

The earliest form of drift eliminators consisted of wood slats that were stacked on angles in order to provide a barrier to the air flow and water droplets. These early systems were known as herringbone drift eliminators. However, this simple shape of a wood slat had limited area for drift removal. Additional slat layers, or passes, could be added to increase the drift capability of the herringbone eliminators. This came at the cost of greatly increased pressure penalties across that component.

The next evolution of drift eliminator technology was the blade-style eliminator, which is still used today. The blade-style eliminator consists of individual blades that are assembled into panels. Initial iterations of these drift eliminators had abrupt directional changes and relatively wide spacing between the blades. Since then, improvements have been made to create a rounded blade profile, optimized blade spacing, and a faster overall manufacturing process.

The latest technology for drift elimination is the cellular-style drift eliminator. Cellular eliminators have taken the blade style to another level by providing more pathway surface area for droplet impingement. They offer greater removal capabilities and have the advantage of ease of manufacturing and installation over other designs.

Brentwood offers various blade- and cellular-style drift eliminators. Please reach out to Brentwood’s Cooling Tower Team with any additional questions regarding the topic of drift!

What is Koroseal? Koroseal is a perforated, semi-flexible PVC film that is used in the manufacture of industrial batteries. In a lead-acid industrial battery, each lead battery plate is wrapped with fiberglass matting to help retain the active material in…