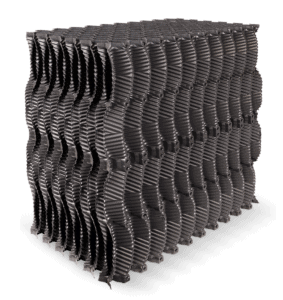 The new ShockWave™ 25 fill’s enhanced vertical-flute design helps to narrow the typical compromise that choice of fill typically entails: cooling performance vs. fouling resistance. For years, the premise has been that in order to have a fill that resists fouling, you have to accept that you are going to sacrifice thermal performance. ShockWave’s patent-pending PowerCurve™ design helps you get more of both sides in that equation. A significant design feature of ShockWave is that it maintains a free and clear vertical sight path through the air travel depth of the pack. This is a key feature of vertical-fluted products, and it is something that is lacking on several other competitive products which are cross- and offset-vertical flute designs.

By harnessing the power of gravity, vertical-fluted designs maximize water film velocities over the surfaces of a fill, thereby increasing the shear stresses on potential foulants on those surfaces. The increased shear stresses mean that foulants have a greater propensity to be washed away, resulting in reduced fouling. Fouling is also reduced in ShockWave due to the reduced overall surface area inherent in only having 12 sheets per foot (305mm) of pack width. The increased corrugation height of 1.0” (25.4mm) means that the passageways through the product are bigger and are less prone to blockage. Generally, this would fall into the typical “performance trade-off” category mentioned above, however, the enhancements built into the PowerCurve design actually rev up the performance well beyond what typical designs offer! In order to maximize the heat transfer capability of ShockWave, the design had to use everything available for heat transfer to its greatest potential: surface area for air/water interaction and allowing for the maximum amount of air to contact the water at its most opportune conditions.

The result of all of this is a fill that offers greater fouling resistance than cross-fluted and offset-fluted designs and cooling performance that is at least equal to, and often greater than, those cross-fluted and offset-fluted designs. These capabilities prove particularly useful for customers who work in industries where their cooling towers cannot be shut down for long periods of time, due to production needs, even if there are known contaminant leaks or other issues. They need a “forgiving” fill to address unforeseen, contaminated water quality conditions that cannot be corrected immediately, and ShockWave 25 is engineered to do just that.

Below are a series of thermal models, using a standard design and size for a field-erected cooling tower, showing the comparison between different fills designs and water loadings. As you can see, ShockWave makes use of its enhanced vertical-fluted design to not only equal existing high-efficiency fill products but exceed them, while also offering the fouling forgiveness of a vertical-fluted product. 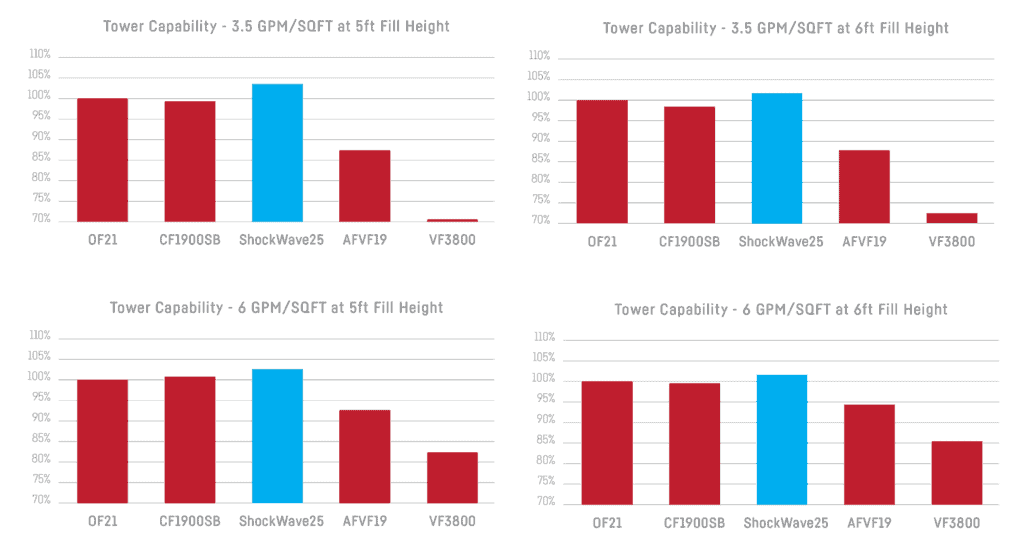