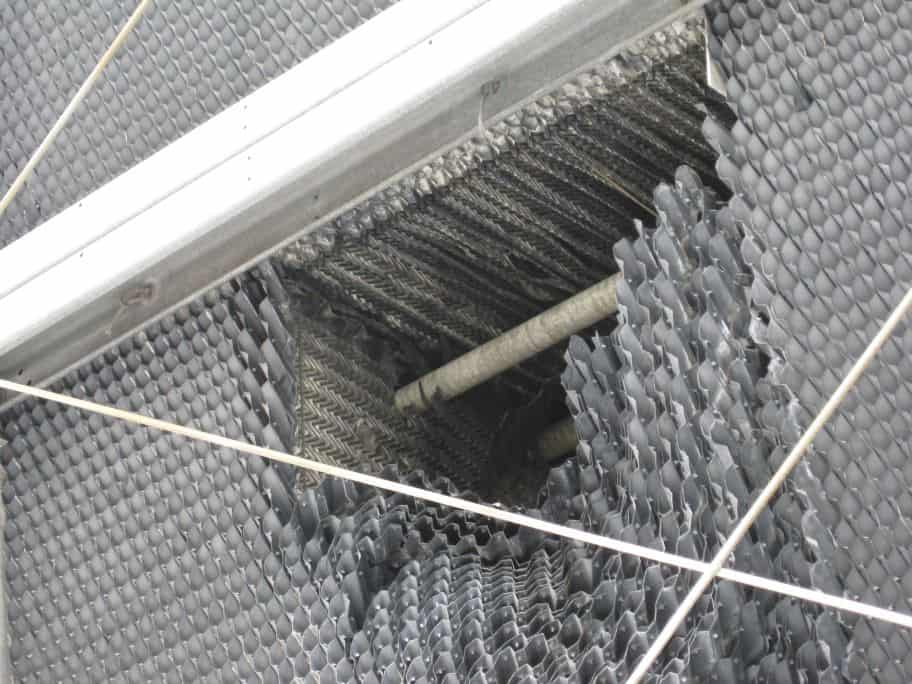 We continuously receive calls from cooling tower owners describing the following: “I have a metal crossflow tower that has been operating for a few years now, and there are a lot of water droplets coming out of the top of the tower, much worse than before. What’s wrong and how do I fix it?”

First, we discuss that the term for the “water coming out the top of the tower” is called “drift.” Since the drift is a new occurrence, it seems obvious something has changed within the tower. Barring any major water flow changes, we start asking questions like these: Does the tower have a separate layer of drift eliminators? If so, have they fallen out of position, or do they have large gaps between them? If the tower has drift eliminators integrally formed into the hanging fill sheets, how do they look?

In most cases, the owner will tell us that it looks like there are a couple sheets that look a little “abnormal” compared to the rest. These sheets look like they are “oozing” out of place. What is actually happening is the PVC sheet has failed at the thin location where the sheet is hung upon its support members.

Over time, either the vibration and fluttering of the air over the fill sheet has fatigued it to the point of fracture, or the weight of the water and scaling/fouling has over-stressed the sheet and caused it to stretch and break. The sheet then transfers its weight to the sheets next to it, causing added stress on those sheets, which are also experiencing increased air velocity due to the opening left by the failing sheets. Next, the loose hanging sheets start to flutter violently and beat themselves apart, causing the failure to spread rapidly. Fill sheets will continue to fail in both directions from the initial failure until the fill falls out of the tower or leaves a large opening in the fill section. This cascading failure of hanging sheets allows air and water to bypass the media and produces an increase in drift droplets escaping the tower, which brings us back to the owner’s original concern and the diagnosis of Hanging Sheet Syndrome, or HSS.

So how can the owner correct HSS? There are two options:

If the owner chooses to replace the fill with bottom-supported structural fill blocks, the possibility of sheet stretching or fluttering is eliminated as the product is rigidly adhered into solid blocks. In most cases, since the fill is designed for structural considerations, these fill sheets are also much thicker than hanging sheets, – anywhere from 20-85% – providing added longevity and UV resistance. Once the fill is installed properly, it is a uniform and rigid block that eliminates the possibility of HSS recurring within the tower.