There are many different words to describe the agent used to bond two objects together: glue, adhesive, cement, and solvent cements. Of these, one sticks out as the simplest ─ glue. However, the definitions of the four terms vary:

Adhesive: a substance that causes something to hold fast or stick by gluing, suction, grasping, or fusing.

Cement: a binding element to make objects adhere to each other.

We can all agree that any of these terms describe a substance that can make two separate objects stick together. Being the simplest of terms, “glue” is sometimes used universally to describe any substance used to bond objects. Depending on ingredients within the substance, we could classify it as an adhesive, cement, or solvent cement, but for most people, why focus on the details when it is simpler and easier to understand the term “glue”?

In fact, when discussing how cooling tower film fill is assembled, it is most often said to be “glued.” In this instance, “glue” is used an all-encompassing term but can also be a bit ambiguous. In cooling tower terminology, “glue” is a carryover term from years past where a substance was added to sheets of film fill to bond them together and the bond strength was based upon the strength of the substance. Although the substances being used have evolved through the years, “glued” is still the go-to word to describe how packs are assembled. 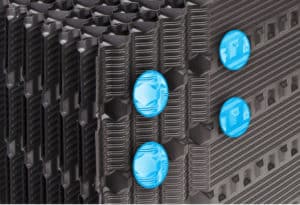 A term commonly used in Brentwood product descriptions is “glue pads” or “glue bosses” (seen to the right). Through the explanation above, these terms are used as general descriptors for the raised points or areas of the film fill sheets where the bonding agent is applied. Whether it be a glue, adhesive, cement, sap, paste, or any other sticky substance, the application should be directly on the glue pads, or glue bosses, and not haphazardly applied to the product in the hope that it will go where it needs to in order to create a strong bond between sheets.

Furthermore, although Brentwood refers to packs being “glued,” what we actually provide is a cost-effective, proven alternative to traditional gluing; this method of assembly is termed a “solvent bond”, which takes the form of a plastic weld. A solvent bond is created when a chemical formulation is applied to plastic fill sheets, allowing the solvents to penetrate the molecular structure so the molecules can mix. As the molecules from one sheet mix with the molecules from the next, they become chemically welded together when the solvents evaporate. So even though these bonds are referred to as “glued,” the bond strength is no longer dependent on the substance applied, but rather, the material properties of the sheets themselves.

Utilizing traditional glue compounds to assemble packs limits the pack strength by the quality of glue applied. Brentwood’s solvent bond eliminates the uncertainty of traditional glue compounds due to the proprietary blend of chemicals we use to create our bonding agent. The strength of a solvent bonded pack is therefore determined by the quality of the material used to make the sheets.

We also have a non-glue, non-adhesive, non-cement, non-solvent method of assembling sheets called Mechanical Assembly (MA) technology! Click through using the link to learn more about that process.

Brentwood is excited to announce our new metallic inlet louvers, designed to complement our existing metallic products. The metallic louvers are intended for use with Brentwood’s metallic fill and metallic drift eliminators. All are ideal for non-combustible, high-temperature applications and are corrosion resistant.…

What should you consider when planning to replace the flights in your rectangular clarifier? Flights are also known as scrapers, c-channels, flight boards, drag flights, and sludge pushers. Regardless of what you call them, they serve the same purpose. Flights…

In the past when people would try to evaluate and compare different fills to each other, one of the pieces of data they would want to know is the Specific Surface Area (SSA) of a fill. SSA is the amount of…