At the recently concluded 2017 CTI Annual Conference in New Orleans, Brentwood’s own Angela Zaorski and Bill Miller presented a paper regarding their research into this topic.

The purpose of the research was to verify whether the “wire-frame” fills being introduced to the market are truly as fouling resistant as some people claim them to be and if there is a difference in fouling potential between different designs of wire-frame fills. Since you can actually see through these products they must be extremely fouling resistant to the worst water conditions, right?

There are many studies and papers that confirm the closer to vertical a film fill’s flute geometry gets, the more resistant to fouling the product will be due to the higher water velocities through the packs and the higher shear stresses that prevent biological colonies from thriving. For example, we see this with our offset-fluted fill, OF21MA, which has proven to be more fouling resistant than a thermally comparable, cross-fluted product – CF1900MA.

So, with this in mind, we did what we do best… test!

First, we placed vertical offset modular splash packs (VOMSF) and cross-fluted trickle packs (CFTF) into our fouling chamber and performed a fouling test for 21 weeks where we monitored the microbes in the system and also maintained the TSS at 375ppm. There were multiple bays of each product that saw the same water quality, the same volume of water, the same suspended solids, and the same light, all for the same amount of time. The weights were recorded continuously over the 21-week period. The average results are displayed in the graph below and show that flute geometry definitely made a difference in the fills’ weight gain, with the cross-fluted trickle design gaining over 400% more than the vertical offset modular splash pack. 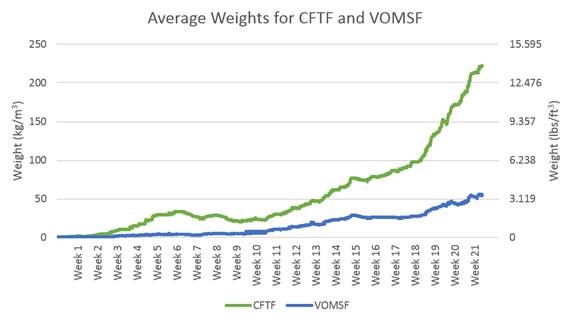 With that information we can determine that, yes, the flute geometry and cooling mode do play a major role in a fill product’s fouling potential, just like has been repeatedly proven for cooling tower film fill media.

However, we didn’t stop there with testing. Much to the dismay of our R&D colleagues who love having super clean equipment, we decided to go ahead and put the fouled packs into our thermal test rig to see what effect the fouling would have on the thermal performance of the products. This would then provide tower owners and operators with a better understanding of what this fouling actually means for the performance of their cooling tower.

Here are the side-by-side comparisons of a thermal run for a standard, field-erected cooling tower modeled with clean products and then modeled with the fouled products: 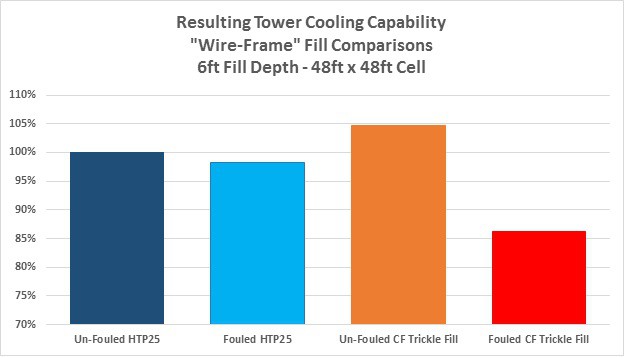 As you can see, the un-fouled, cross-fluted trickle fill provide slightly increased thermal performance when modeled in an “as-new” scenario. However, owner/operators understand that after the first day in use, the packs will inevitably start to foul. Under the same compromised water conditions, seeing the exact same water quality for the exact same amount of time, the tower utilizing the fouled, offset vertical splash pack lost only 2% thermal capability. In contrast, the tower modeled using the fouled, cross-fluted trickle pack lost a staggering 18% tower capability! That can be devastating to a plant’s performance and profitability.

The obvious tradeoff is that an owner needs to be aware of the lifecycle cost associated with their fill selection and not necessarily the evaluation of the tower in an “as-new” state. If you are looking at utilizing a wire-frame fill, then you know you have fairly compromised waters already and are looking for a product to reduce the impact of fouling over the long term operation of the cooling tower.

From Brentwood’s experience, cross-fluted trickle packs can just as easily plug when utilized with lake and river waters where muds, silts, and biologicals are a major component of the source waters, such as in one of the many photos we get from customers where products are mis-applied. These muds and silts get stuck to the biological growth being formed along the many strands and in the many “nooks and crannies” of this style product and grow upon themselves, causing plugging.

To combat this plugging, the selected product should incorporate more vertical flute geometries to combat biological attachment and also incorporate a splash, or impact, mode of heat transfer to combat depositions.  This will decrease fouling as compared to a cross fluted design that operates by trickling the water along it’s structural members with secondary dripping.

If the best selection for a compromised water application is a wire-frame product and long-term performance is important, then the research clearly shows that the more vertical-fluted products are indeed much more fouling resistant and will provide colder water for a lot longer time. This is the same, proven, results that we see with film fills.

If you are interested in reading the full paper on this topic, you can purchase it from the CTI website for a nominal fee.