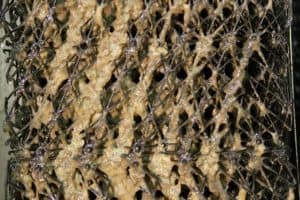 Fill fouling is the deposition of material on the fill’s heat transfer surfaces. It involves one or more of the following processes: 1) biological fouling due to biofilm development, 2) deposition of suspended solids due to sedimentation, 3) scaling of dissolved minerals due to precipitation.

We will focus on fouling caused by the combination of suspended solids deposition with biological deposits (scaling will be discussed in a later article). Since modern film fills have such large heat transfer surface area per unit volume, this type of fouling can cause problems such as significant decreases in thermal performance and increases in pack weight. The former will cause a loss of system efficiency and the latter can lead to catastrophic failure of the fill support system.

The Biofilm Connection
Many studies have been conducted to determine the mechanism of fouling and have concluded that biofilm formation on the fill’s heat transfer surface is the cause of this issue. A biofilm is a complex ecosystem of bacteria that produces an extra-cellular polymeric substance – the binder that holds the system together. This binder is also responsible for the accumulation of silt and other suspended solids, which forms the fouling mass. Investigations have determined that this combination of silt accumulation on a biological slime substrate is the basis of suspended solids-related fouling.

Full Depth Packs vs. Packs Installed in Separate Layers
In researching the cause of fouling, scientists have performed long-term, in-situ pack fouling studies as well as controlled laboratory evaluations. The results suggest that full-depth packs do not inhibit suspended solids fouling any less than separate fill layers. However, a deeper pack has the drawback that it can only be inspected by removal from the tower (300 mm & 600 mm packs can be monitored in-situ).

One in-situ study at a large central station power plant in the southeast U.S. is testing all commercially available low-fouling fills. Brentwood’s low-fouling fills, installed in separate layers, have all met their fouling criteria for net foulant weight gains and are considered approved for installation in all their tower projects.