Just what are the effects of fouling on a fill, and what does it mean for overall tower performance? This is a question that Brentwood has been researching for a few years. As film fills have evolved and tower owner/operators have paid tuition to the “school of hard knocks,” it has become apparent that one of the keys to proper fill choice is choosing a fill that lasts for years so that you can get a positive return on your investment.

The balance scale that weighs fill performance vs. fouling resistance means that, generally, in order to gain fouling resistance you have to give up cooling performance. The design of low-fouling fills incorporates this fact into the design. As fill designers coming up with a low-fouling fill, we sacrifice some initial cooling capability with the intent that as the fill fouls, it will be able to maintain roughly the same level of cooling capability over the long haul.

What this means is that if a tower is designed around a low-fouling fill, it will either be larger and/or require more airflow (i.e. fan power if it is not a natural draft tower) than a tower designed around a high efficiency fill in order to achieve the same design duty. Generally, this means that the initial expense of a low-fouling fill tower will be higher than a comparably designed high efficiency fill tower. While that may make sense from a capital expenditure perspective, the recurring yearly expenses may skyrocket due to lost production capabilities or other factors if the tower loses 15% of its cooling capability in only 5 years.

Based on testing at Brentwood’s R&D facilities, we have compared the impact that fouling has had on both film fills and newer “wire-frame” style products. Our goal was to compare both the fouling characteristics and the effects that the fouling has on the overall cooling capabilities of different products simultaneously. Thus, for an equal time of residence in a given circulating water condition, how much fouling and sediment buildup would accumulate, and what would that do to the “as new” fill’s capacity to cool? 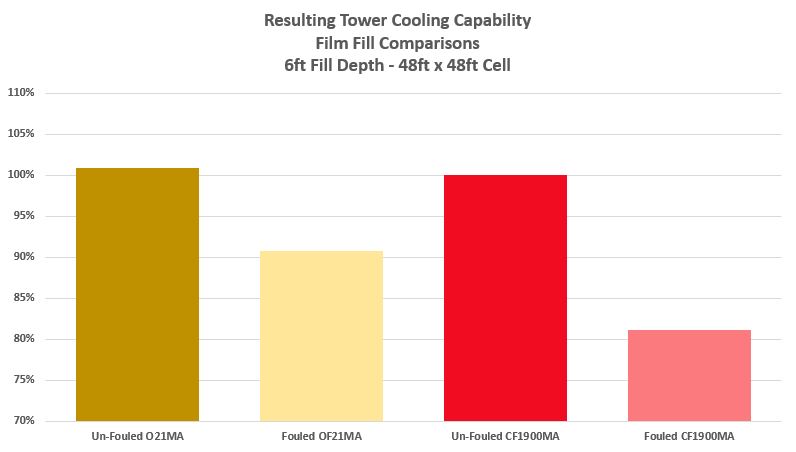 One important thing to note was that when comparing the new “clean” packs, OF21MA provided slightly more cooling than CF1900MA, even though OF21MA is a more fouling resistant fill. Although this goes against the general trade-off mentioned above whereby fouling resistance is gained at the expense of a loss in performance, the long-term effect held true: OF21MA had about only half the loss in performance compared to CF1900MA.

For the results on “wire-frame” style trickle and modular splash fills, check out the paper that Brentwood is presenting at the 2017 Cooling Technology Institute (CTI) Annual Conference in New Orleans, LA, or purchase it from CTI – Paper# TP17-05, “A Study on the Bio-Fouling Characteristics of Contemporary Trickle and Modular Splash Fills.” It provides an interesting look at the differences in fouling resistance between two different “wire-frame” products, the ramifications of trickle vs. splash cooling, and the role that traditional fouling resistance parameters such as water film velocities play on the long-term cooling performance of fill.