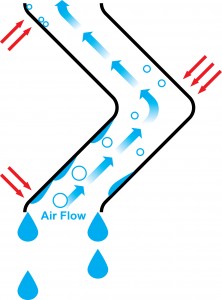 To answer this question, we must first start with the basics of drift eliminators. Drift eliminators aid in the removal of water droplets from an airstream in a cooling tower. They work by changing the direction of the airflow and causing the entrained water droplets to impact the walls of the eliminator. When this happens, the droplets are removed from the airstream and run along the walls to drain back into the wet section of the tower.

Since drift eliminators function through inertial impaction of the drift droplets on the eliminator walls, there are different aspects as to how they work across varying operating airflows of a cooling tower:

It is also important to note that proper plenum height allows for a more uniform air distribution across the drift eliminator plane. This means that consideration needs to be given not only to the average air velocity through the drift eliminators but also to the possibility of localized velocities that may be caused by the tower design. Additionally, nozzles have a signification effect on drift eliminator performance. Droplet size generated, distance from the nozzle to the drift eliminator plane, and the surface tension of the circulating water are significant factors in understanding potentials for drift.

A good way to begin analyzing drift eliminator effectiveness for counterflow towers is to model the tower in Brentwood’s S.T.A.R. program. This program will help you to determine the average airflow through the drift eliminators, which you can then use to estimate a drift rate based on the published drift rate curve for a given product. These curves can be downloaded by creating a myBrentwood account and navigating to the Document Center. The S.T.A.R. software can also provide an alert to potential velocity imbalances from a short plenum based on a low fan coverage value.

If you’d like to discuss performance data or results from S.T.A.R., you can always call and talk to our Application Engineering team at 610-236-1100. And if you’d like to receive more information like this from Brentwood, sign up here for our quarterly cooling tower newsletter!

A question Brentwood occasionally receives from customers is: “Why is my tower not performing as designed?” Along with the inquiry, we are typically given the hot and cold water operating temperatures for their tower and an observation that the difference…

Brentwood is excited to announce our new metallic inlet louvers, designed to complement our existing metallic products. The metallic louvers are intended for use with Brentwood’s metallic fill and metallic drift eliminators. All are ideal for non-combustible, high-temperature applications and are corrosion resistant.…

What should you consider when planning to replace the flights in your rectangular clarifier? Flights are also known as scrapers, c-channels, flight boards, drag flights, and sludge pushers. Regardless of what you call them, they serve the same purpose. Flights…