It’s important to regularly touch base on the basics of cooling towers to provide anyone new to the industry with vital information, but it’s also a good reminder for those who have been in the industry for many years. There are three basic flute geometry designs for modular film fills: cross flutes (CF), offset-vertical flutes (OF), and vertical flutes (VF). Each geometry has its own set of advantages and disadvantages in relation to fouling resistance and thermal performance. 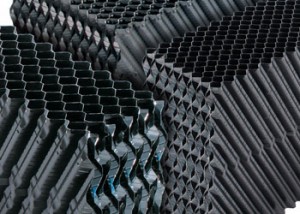 Cross Flutes
Cross-fluted designs have been the industry standard for over 30 years. The nominal 30° from vertical flute orientation – 60° angle included between flutes on adjacent sheets – maximizes turbulence and air-water mixing, and high rates of heat transfer are created in relatively shallow fill sections (6’ and less).

Another important feature is this geometry’s ability to redistribute the falling water laterally so that a multi-layer fill section made up of alternating horizontal rows can fully “wet-out” the entire packed volume. This makes the cross-fluted geometry very thermally efficient but not very resistant to fouling. Because of the angled flutes, water film velocity is slowed and deposition of solids can readily occur. It is for this reason that Brentwood discourages CF fills in water that has a high degree of fouling potential. 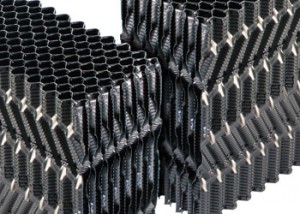 Offset-Vertical Flutes
Like CF fills, the offset-vertical flute geometry allows for a high degree of air-water turbulence, and therefore, high heat transfer rates. A differentiating factor between the two fill types is that offset-fluted fills offer lower airside airflow resistance (pressure drop) than CF fills. The vertically oriented flutes allow for high water film velocity, thus allowing for a higher degree of fouling resistance than CF fills. Since the flutes are offset, the water can migrate laterally, as it does in CF fills, but to a lesser degree. For highly fouling water, however, OF designs should be considered only if achieving maximum thermal performance is required. 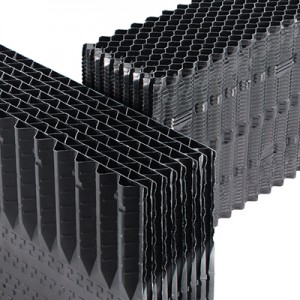 Vertical Flutes
Vertically oriented flute geometry allows the highest water film velocity and the highest degree of fouling resistance. New VF designs allow for high heat transfer rates but not as high as those of CF and OF designs. The high velocity water film significantly reduces the attachment of slime-forming bacteria, and therefore, the accumulation of silt. This type of media is recommended by Brentwood when the source water has strong fouling potential and thermal performance can be compromised.

The above references are for counterflow fill designs and their macro-structure. The same basics can be applied to film fills as well as for newer modular splash packs, or trickle packs. There has been a recent uptick in the requests for information regarding the fouling potential between a cross-fluted designed trickle pack and an offset vertical designed splash pack, like the HTP25. Even though these products may look very anti-fouling, the underlying principles of why packs foul is still at play. Cross-fluted designs still increase thermal performance at the expense of water velocity through the packs as compared to a vertically offset design due to the reduced water velocity and corresponding shear stresses.

Future blogs will dive deeper into fouling and we will be sharing some preliminary results from the Brentwood R&D fouling chamber, so keep an eye out!